Lancaster (local pronunciation /ˈlæŋkəstər/ lang-kəs-tər or even /ˈlæŋkstər/ langk-stər) is a city in Fairfield County, Ohio,United States. As of the 2010 census, the city population was 38,780. It is located near the Hocking River, approximately 33 miles (53 km) southeast of Columbus and is the county seatof Fairfield County.[5]

The earliest known inhabitants of the southeastern and central Ohio region were the Hopewell, Adena, and Fort AncientNative Americans, of whom little evidence survived, beyond the burial and ceremonial mounds built throughout the Ohio and Mississippi valleys. Many mounds and burial sites have also yielded archaeological artifacts.[6] (See also: Serpent Mound andHopewell Culture National Historical Park, which though not located in Fairfield County, are close by.)History 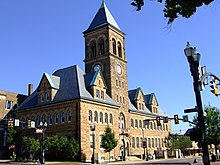 From Wikipedia, the free encyclopedia

Please correct the inputs that are highlighted in Red and try again.


Thank you for submitting your review! Once it is approved, it will appear on the profile.

Please provide your contact information, and we'll verify that you are authorized to claim this business. You'll be provided with a username and password once verified.